POLYCHROMAT1K - A Trackmania Video by Lars and Ozon

Lars and Ozon are proud to present their biggest project yet. POLYCHROMAT1K is a video in the game Trackmania² featuring 1000 cars (1k project) driving on a multiroute track going through a variety of valleys, tunnels and rivers. The video project started in 29th of June 2016, as an idea by Ozon to create a simple 1k project using colored cars. This is a duo video, which even included video editing as part of the collaborative process.

We'll take you through various aspects of the development of the video below. If you are interested in our resources and project files, you can navigate to them here.

The project started with a good old Google Spreadsheet and some ideas + discussion on Discord. The original idea by Ozon was to create a 1k video in 2 weeks, with a simple idea (which was using colored skins, seperating in paths) and maximum dedication. At the beginning, the team "mapbuilding" consisted of ben3847, Lars and Ozon. The map was supposed to be a normal race map with multiple routes.

It was aimed to create a map using the TMPlus titlepack and the awesome cliff items. Also, the CanyonCar was found to be a great fit for a fast-paced run, which is why it was decided to do EnviMixing.

Just some candy in a tunnel...

Shortz took on helping the project out with some awesome looking colored skins. We defined a total of 10 colors aligned on a rainbow scheme.

At this point, we'd like to note that the 100k project by L4bomb4 was announced roughly 4 months after the beginning of our project. The coloured skins and parts of the map of our own video were done already at July in 2016 (3 months earlier), as indicated by the following sources [1, backup][2, link to zip]. As indicated by Danixks, the project is set to finish and release this year, which we are very delighted about. We wish the team behind it the best of success. 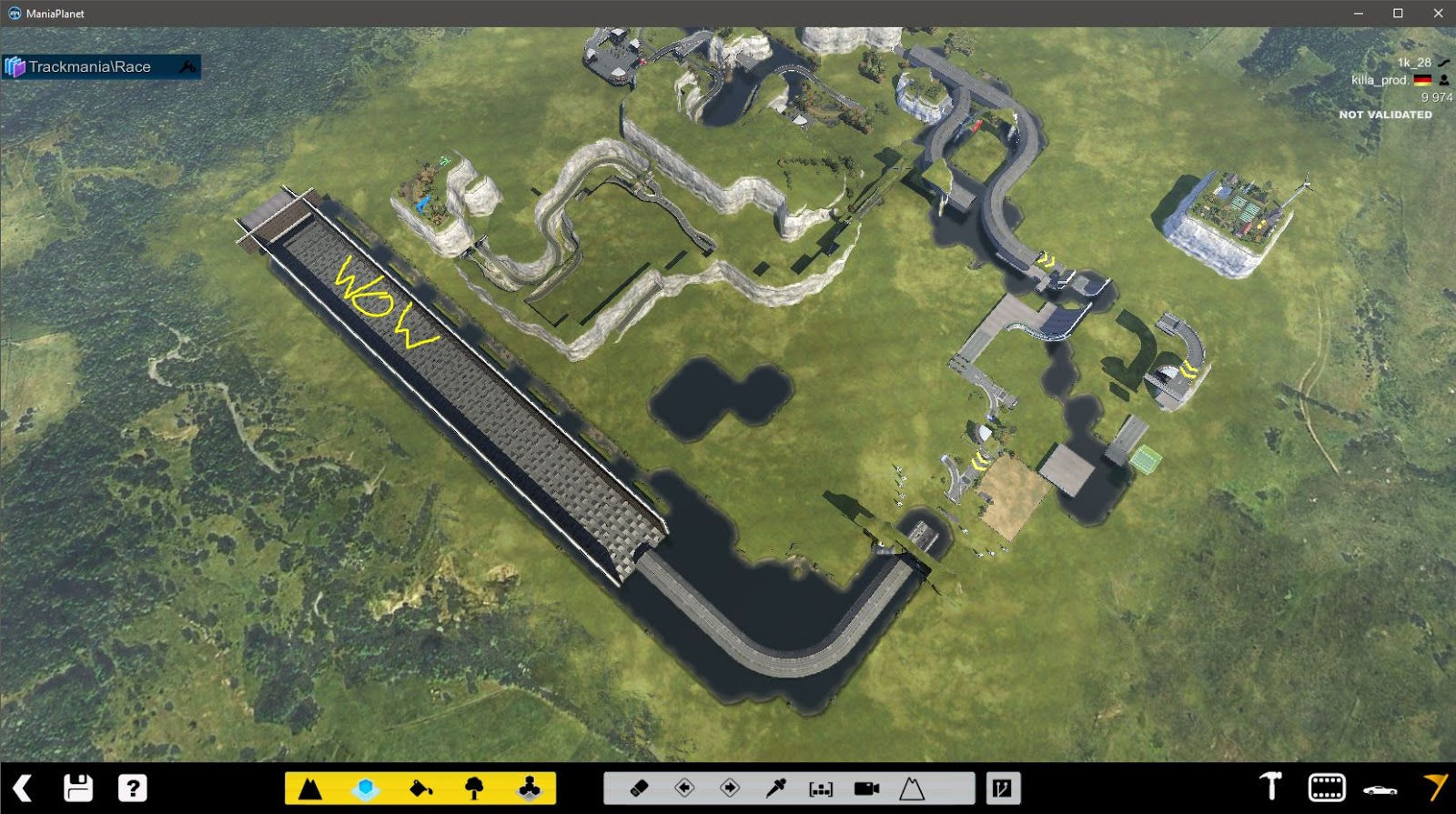 The finished route of the map, in its first iteration.

While the mapping part sounds simple, its difficulty lied within managing the timing of the several routes to be almost exactly the same. Meaning that no matter which way you drive on a Y-junction, you end up driving the same or a similar time than on another route. This got increasingly difficult as the map and the pace was steadily developing, while building the map and driving the replays.

The process of route mapping took about 2 months. 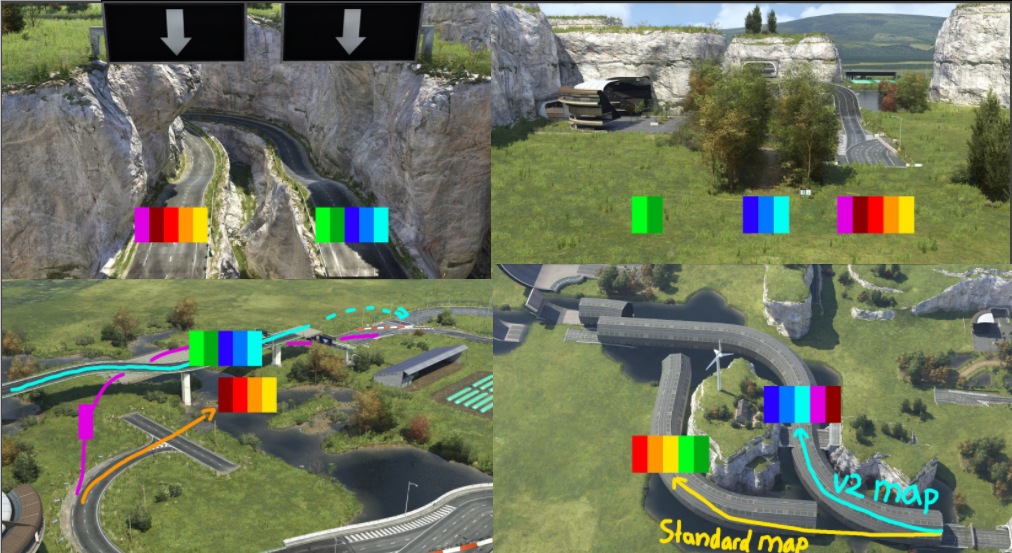 An instruction on how to drive the route depending on which car colour you drive.

When the base route was done, it was steadily improved throughout the beginning of the driving phase, with minor scenery elements added to the scene for collision compliance.

Ozon: "I recall the first evening with Lars when we drove replays for the project. We were enthusiastic at first, but after 3-4 hours realized that this is going to be a humongous task: Lars got 3-4 replays in, I got 0. In the first week I got about 3-4 replays in."

We realized we needed help and asked players Marius89 and SiH (and some others that didn't deliver) to help us with replays. While both "only" accumulated 35 replays together, their help was nonetheless very valueable to our project!

SiH: "ok just as i thought i was fine the tunnel entrance is only accessible using a lift"

It was not until the April of 2017 - almost 1 year after the start of the project - that we reached the 1000 replays. A milestone that was long overdue. 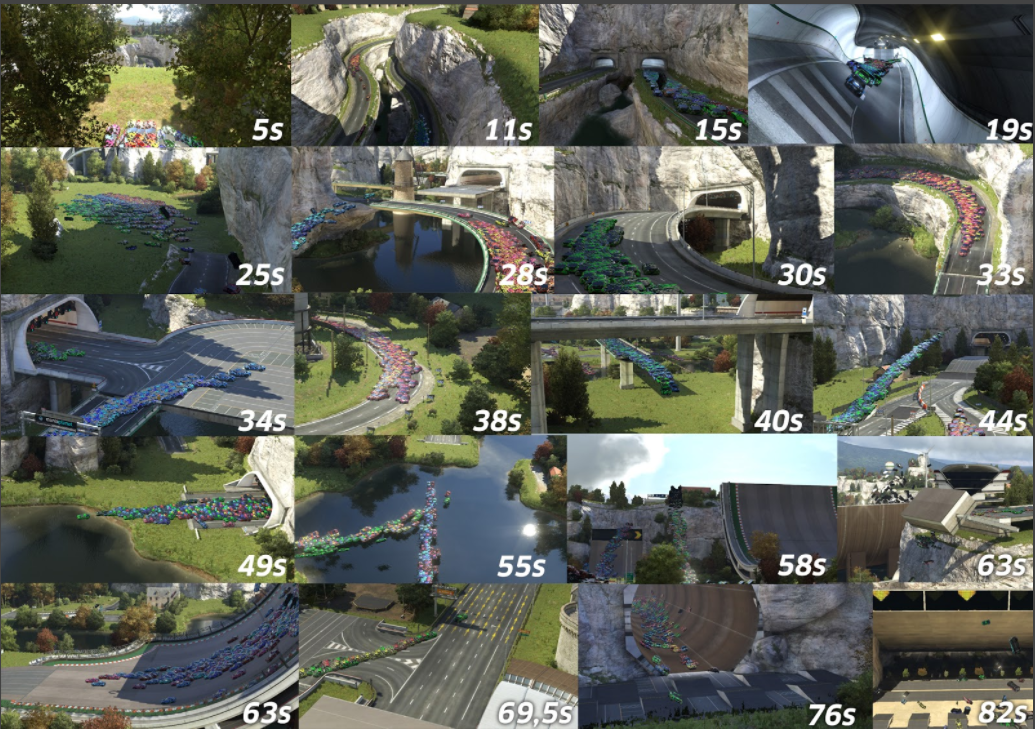 This phase describes the shooting phase of the project. Here an ingame tool of Trackmania - the so-called MediaTracker - is used to merge all cars into one scene, create cameras and make a video file out of it. This started the fun phase of the project, as Lars and Ozon both like creating videos.

The collaboration was made easier using tools such as Google Drive for file sharing, Discord for video/screen calling and Streamable for quick video clip sharing. That way, instead of first rendering and then editing the clips, the edited replays were rendered using low quality settings, uploaded on google drive and a video edit could be produced using LQ video clips. This saves a lot of time.

Such a draft edit looked like this. These things are important to get a proper overview. You can see that every camera in this clip has changed in the release version. Such clips were the base for productive discussions. At the end of the editing phase, the clips were simply replaced with HQ ones.

This phase would not end until the release year, since cameras continued to improve. The first "full cut" was finished in late 2018.

The almost finished timeline in Vegas, tidied up for the image.

The editing went hand in hand with the shooting phase. If MediaTracker clips didn't fit, they were adjusted and re-rendered. In a RL-footage based video, this wouldn't be possible, of course. In engineering, this would be called an iterative-design approach, where perfection is not reached through precise assumptions (or in this case: perfectly fine looking shots), but by iterating through the wildest ideas first, finding a suitable candiate and then changing + re-rendering until the result is satisfactory.

The videos were cut together in Vegas, using project files placed inside a shared folder on Google Drive, which allowed Lars and Ozon to collaborate on editing. For convenience, screensharing proved to be more useful in the later stages, since the HQ video clips could not be shared (filesize heavy).

It was chosen rather to resort to video calling than to upgrade to a 1TB cloud storage plan.

After the basic cutting in Vegas was done, HQ rendering started in Maniaplanet - Trackmania²'s game engine. The LQ videos were then replaced in Vegas using HQ ones. Since Ozon benefitted through hardware upgrades on his PC, he chose to take over the editing of the heavy files, incorporating Lars into the editing process using Discord screensharing. 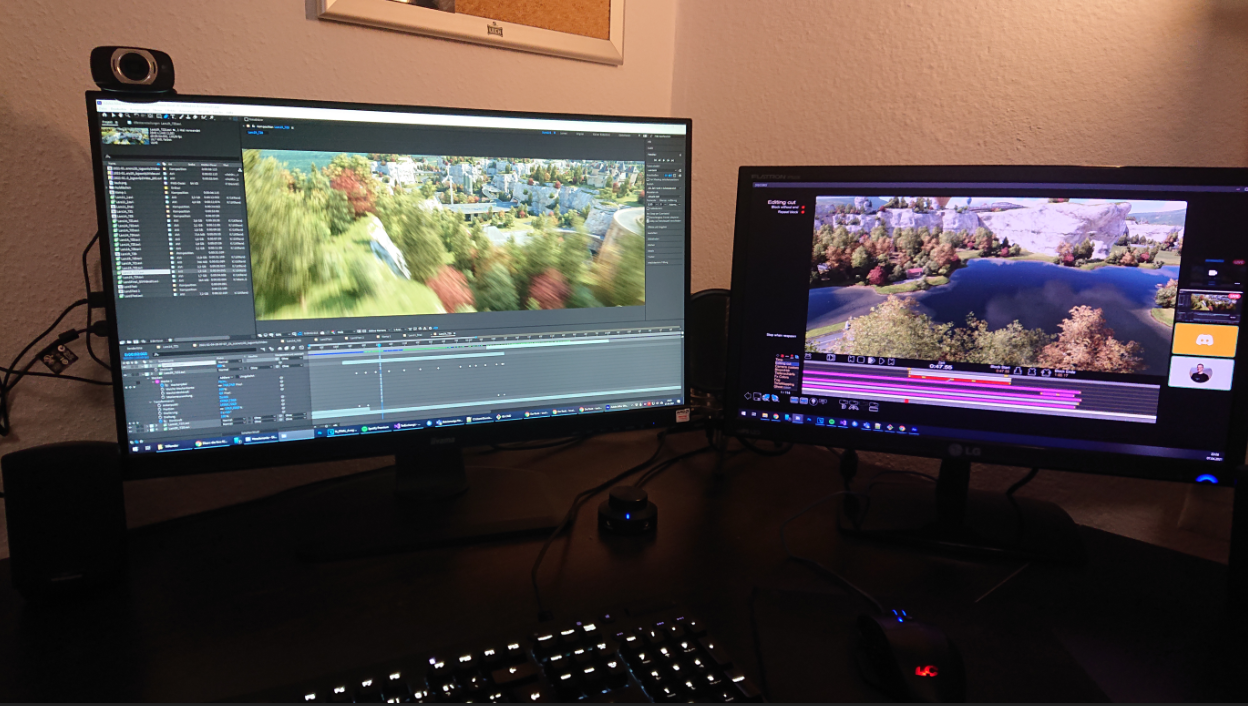 A typical work evening for the 1k project with direct feedback given and received by both.

Ozon: "Something Lars and I wanted to do was to include a really long camera somewhere in the video. It turned out later to be the intro camera. We really worked hard to make it work for the video. It felt really good to see it the first time with the song playing and the cars going. Every step towards finalizing this made it look even better, like creating the masks in After Effects between the groups of cars."

That one camera flying over the cliff

That was not supposed to happen...

Ozon: "I remember the first time we looked at the replays, when we saw that... the cars would just go through each other at the QP jump! Turns out that our quest of driving quicker and quicker times has lead to us taking the Quarterpipe jump lower than planned. We realized this very late into the driving phase. In 2020, Lars came up with a nice solution to salvage this part of the video."

The modified water wake in MP4 "ruined" the water part of the video...

Ozon: "I remember we weren't sure how good it's going to look. One the one hand: Reflections! On the other hand: Trouble. The update to Maniaplanet 4 broke a lot of stuff for us. The water wake became really unaesthetic, which we eventually were able to fix with Openplanet. Also, the water reflections and car details would suddenly start to bug out - there were holes in the cars, if too many were in the view."

"We had to make a lot of sacrifices and engineer a lot of workarounds to make it work. It's definetly one of my least favorite parts of the video, simply because it is not as good looking as I'd like it to be."

The chaos ending and the car jumping into the basket

Ozon: "The basket jump was a very spontaneous idea. The balloons were already there and I asked Lars to drive until he lands it in the basket."

We'd like to share with you everything that we used to develop the video. Maybe it helps other upcoming creators in understanding how such a project can be carried through from beginning to end and also it might unveil some of the tricks that were used in order to achieve the images.

Here's a download for the 10 CanyonCar skins used in the video. If you happen to have downloaded the skins from the link above: These are older. This download includes some improvements on the skin styling (number plate, black rims, colored tyre sidewalls...).

This is a Valley Texture Mod, which only changes the train textures to fit the fictional ManiaCargo company design.

Yes, you can download all of the replays we used for the project. Perhaps these can be of some use. They were always stored in the cloud anyway.

You can find the folder here, with a timeline description to each clip so the replays can be matched to the video.